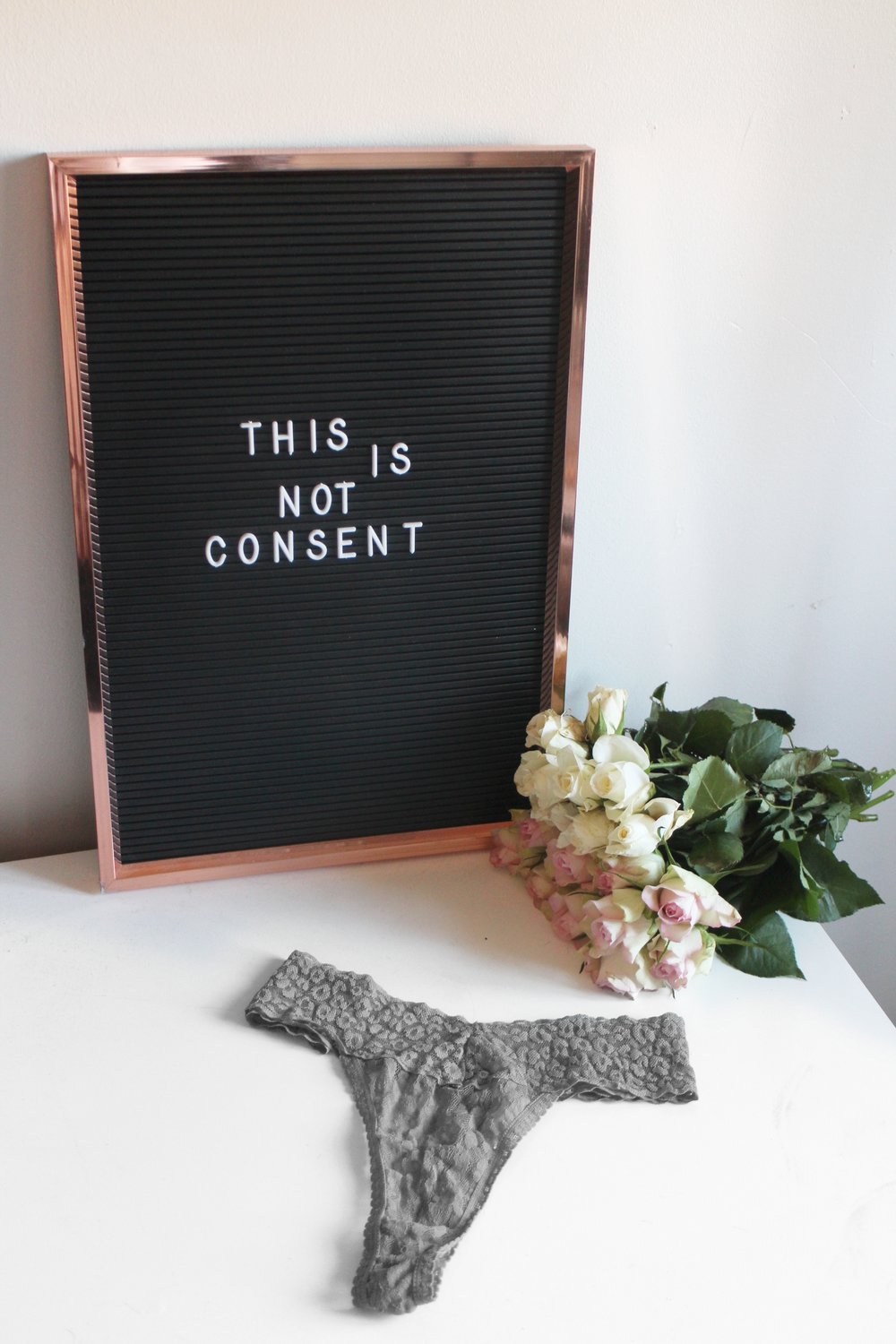 You are here: Home / Uncategorized / #THISISNOTCONSENT

It’s recently taken over twitter, instagram, facebook that girls are wanting to show off their pants, why though? well if you’ve not heard all about the recent rape trial verdict in Ireland, you may wanna get a cup of tea and be ready to be completely outraged to why the judge thought it was okay to let a rapist get off because of the girls knickers. I want to share this story to raise awareness, but also to put my two pence in on how women are still portrayed. Here’s the back story – “Women around the world are posting pictures of their underwear on Twitter after a 27-year-old man was acquitted in a rape trial in Ireland during which a teenager’s thong was used as evidence. A jury in the criminal court in the city of Cork took an hour and a half deliberating on November 6 to declare the defendant not guilty of raping a 17-year-old in a lane at night. In her final address, defense barrister Elizabeth O’Connell asked the jurors to take into account the underwear the teenager was wearing. “Does the evidence out-rule the possibility that she was attracted to the defendant and was open to meeting someone and being with someone? You have to look at the way she was dressed. She was wearing a thong with a lace front,” she said, according to the Irish Examiner. Using a thong as evidence of implied consent was considered victim-blaming by many women on social media, who started publishing pictures of their underwear using the #ThisIsNotConsent hashtag.” quote from CNN.

Since the news has broke about this verdict from the courts, women all over Ireland and England have been outraged. This has built up the hashtag #THISISNOTCONSENT Over all I think the verdict is disgusting. the quote of – “Does the evidence out-rule the possibility that she was attracted to the defendant and was open to meeting someone and being with someone? You have to look at the way she was dressed. She was wearing a thong with a lace front,” This really gets me angry. We all meet new people for one, we go on dates. We meet lads, and we can infect be attracted to them without having to sleep with them straight away. Even if the situation between the two was romantic and planned to meet and be romantic this does not mean the girl gave consent and wanted it to go that far. But also why does a pair of lace front underwear suddenly give any man the permission to have sex with you? Something i’ve always felt really strongly about it how women are judged for their choice in clothing / underwear. It can to light before that because a girl was wearing a short skirt, she was also “asking for it” if a girl is wearing anything you know a little saucy, it’s not for you or to invite you into her pants. She’s wearing it for herself.

The amount of times on a night out I’ve had my ass grabbed/slapped or grinned against. I’ve had men come up to me and just stare at my tits, and attempt to touch them, why because I have a low cut top on that means I’m begging you to touch/look at them? not at all hun. The way women dress and make themselves feel good by dressing up, or even just wearing some sexy underwear to feel good. Should never be taken to someone else’s advantage. The perception of if a women dresses more revealing, or wearing items which are still seen to be “slutty” she is in fact a slut and is gagging for it. This is something that needs to change! I think the worst part about this all is that the judge was a female. A fellow female who should have been getting justice for the victim. However she did not label her as a victim at all but nothing more than asking for it because of her lace front underwear. I wonder, if we was to check her underwear draw and she had a lace thong, would she of been asking to be raped too? It’s sad that even women don’t stand up for each other. Times have changed and we all need to come together to put an end to all this bad mouthing fellow females. GIRLS SHOULD SUPPORT GIRLS. If you aren’t happy with the verdict I ask you to also share your panties on social media #THISISNOTCONSENT and let’s all support any victims of rape or abuse.

AN OLDIE BUT A GOODIE.